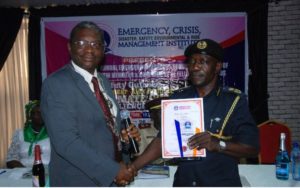 Lagos State Fire Service in the cause of performing her statutory duties has earned many Awards, Commendations and Appreciation Letters from the Public including Federal Establishments and Multinational Organizations.

It may interest you to know that the State Fire Service received ‘Best External Assisting Agency of the Aerodrome Rescue and Firefighting Service (ARFFS), from Federal Airports Authority of Nigeria (FAAN), this might be borne out of Fire Emergencies that were effectively attended within the Airport with outstanding performance and commendation. In recognition of its gallant performance the ‘fourth estate of the realm’ Lagos State Governor’s Office Correspondents (LAGOCO), 2015 and Crime Reporters Association of Nigeria, 2016 bestowed recognition of honour on the noble profession.

The concurrent Nigerian Safety Awards for Excellence 2015, 2016, 2017 and 2018 among several others. The Service also added Best Director of the Year from The forward News, Regulatory Agency Appreciation Award for 2018 from IOSH Nigeria Network Group, Best Emergency Responder from Emergency, Crisis & Risk Management Institute as well as all-time Award as the Best State Fire Service in the whole of the Federation since Year 2009 till date.